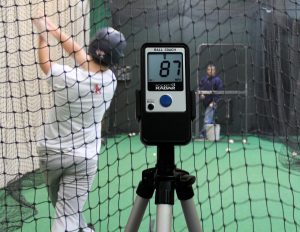 Answer: Let’s put the Pocket Radar Ball Coach to the test in a side by side comparison with the Stalker Sport 2, Stalker Pro 2 & the Jugs Gun, some of the biggest names in radar guns and find out!

The purpose of this comparison is to show visitors to BaseballXGear that you do not need to spend an arm and a leg to get a quality radar gun that gives accurate and consistent speed readings.

The radar guns that we will throw up against the Pocket Radar Ball Coach in this article are:

When visitors stop by BaseballXGear to check out our radar gun reviews, they often times find their way to our #1 recommended gun…The Pocket Radar Ball Coach.

One of the most common questions we get concerning the Ball Coach is whether or not it is really accurate.

We have used the Pocket Radar for a while now and it has become just about the only gun we use. On the rare occasion that we need to measure speeds from over 120′ away, we do rely on the Stalker.

At this range, the Ball Coach has proven itself to be just as accurate as the big boys.

At the end of this article, we will include a video of the Ball Coach side by side with each gun.

Here’s a quick chart we put together to get things started.

As you can see in the chart above, there is quite a price difference between the radar guns.

The biggest question we need to consider is what we will use the radar gun for.

What will you use the radar gun for?

Each situation is going to be different.

For me personally, I use a radar gun for mostly coaching purposes, and of course for a little fun.

I am not a scout looking for the next MLB superstar, so it is unlikely that I will need to read baseball speeds at 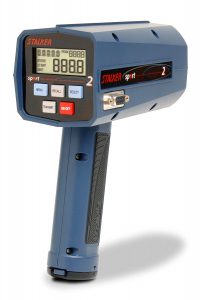 While the Stalker and Jugs Guns offer this type of range, most of my radar gun activities are accomplished in the 100′ or less range.

You really have to consider your budget when looking for a radar gun.

I have had the privilege of using all of these guns, but cost is definitely a big stumbling block if you want to read the speed of a baseball over 120′.

There is no argument from me about the accuracy of each of these guns.

When Pocket Radar, Jugs & Stalker claim that their radar guns are accurate, they are telling the truth.

Each gun gives accurate and consistent readings within 1mph of each other almost every time when compared side by side.

One of the main reasons I use a radar gun is to show pitchers how tweaking pitch grips and mechanics can affect the velocity of the ball. Having a radar gun that delivers consistent readings is very important.

Each of these guns have proven to me that they can deliver accurate and consistent speed readings.

The range that a radar gun can deliver accurate and consistent readings will be the biggest determining factor in deciding what price you are going to pay.

If you’re a Little League coach like myself, you will most likely not need to measure baseball speeds from a football field or more away.

On the other hand, if you want/need this type of range, you are going to need to pay up for that kind of distance.

I have seen radar guns other than these claim to give accurate readings at 300′ or more, but when put to the test have failed miserably.

I have also seen radar guns claiming a 100′ range fail.

I have proven the Pocket Radar Ball Coach, Jugs Gun and Stalker to be true to their claim.

Each of these radar guns give you the ability to go hands free with tripod mounting abilities and a “continuous on” mode. 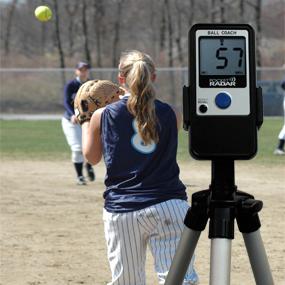 Continuous on means you can set the gun to read speeds without holding the button in or pulling the trigger.

One of my favorite features with the Ball Coach is the ability to record the last 25 speed readings. This allows me to have a pitcher try out several different pitch grips and delivery positions.

Then we simply hit the recall button and review which grips gave the pitcher the desired results.

Having the ability to go hands free really allows you to focus on the coaching aspect.

Seeing these 4 radar guns in action side by side is really going to give you a good idea of what you can expect with the Pocket Radar Ball Coach.

Enjoy the video and then we will wrap things up.

You will notice that the price of some of the guns have increased.

But not the Ball Coach!

As you’ve seen in the video, the Pocket Radar Ball Coach delivers accurate and consistent speed readings just as well as the Stalker and Jugs guns!

Is The Pocket Radar Ball Coach Accurate? – The Bottom Line!

We have spent a lot of time with the Pocket Radar Ball Coach and we can say with confidence that it is very accurate and consistent.

If you decide that you are going to need to accurately and consistently measure speeds from more than 120′, then we have no problem with recommending either of the Stalker Guns, or the Jugs Gun.

But if you need a radar gun that can deliver accurate and consistent readings at a more relevant 120′ range, then

Heck…When your all done for the day, you can even throw it in your Pocket.

I have put together full reviews of the Stalker Sport 2 & Pocket Radar Ball Coach. If your considering either, I strongly suggest you check out each one to see which gun will suit your purpose the best.

I truly believe you will love these radar guns!

If you have any questions, please leave a comment below and I will get back with you right away.