Find answers to common and uncommon baseball questions with this Baseball FAQ. If you don’t find the answer you were looking for just ask us! Post your question in the comments below or contact us. All responses are based on MLB rules. Different leagues may have different rules and even the same league e.g. Little League baseball may have local rules for the local Little League organization.

If a substitute batter inherits two strikes and then gets a 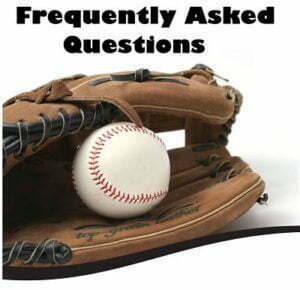 third strike who gets charged with the strikeout?

In all instances EXCEPT inheriting 2 strikes the replacement batter will be credited with the result. However, if the batter inherits two strikes and then subsequently strikes out the original batter will be credited with the strikeout. This situation can occur due to injury or ejection of the original batter and a substitute batter becomes necessary.

Can a run score on a tag out of a forced runner?

No, a force out does not have to end in the touching of a base, it can end in a tag. The run does not count because the runner is forced to advance by the batter, constituting a “force out”. A run cannot score on a force play (commonly called a force out) that results in a third out of an inning.

(a) One run shall be scored each time a runner legally advances to and touches first, second, third and home base before three men are put out to end the inning. EXCEPTION: A run is not scored if the runner advances to home base during a play in which the third out is made (1) by the batter-runner before he touches first base; (2) by any runner being forced out; or (3) by a preceding runner who is declared out because he failed to touch one of the bases.

If a baseball batter hits a pitch on a bounce, does it still count as a hit?

Yes, the ball is in play just as if the pitch never bounced.

Is it a hit-by-pitch on a bounce?