Would you like to see the infield fly rule explained? 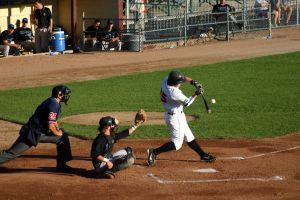 Considered by many to be one of the most controversial calls that an umpire can make, the infield fly rule has had its fair share of controversy.

There is also a lot of confusion about the rule. In this article we will discuss the rules origin, purpose, and go over some different scenarios where the rule can come into play.

So without further ado, let’s tackle the infield fly rule!

The infield fly rule was put in place to prevent a defensive player from intentionally dropping a pop up in the infield and turning it into an easy double play, or even a triple play.

The rule was first introduced by the National League in 1895 and only applied with one out.

The current infield fly rule went into effect in 1901 and applies with less than two outs.

When Can The Umpire Call An Infield Fly?

The most important rule to remember about the infield fly rule is that it is strictly a judgement call by the umpire. The rule can be invoked by any umpire on the field.

When a pop up is hit in the infield, an umpire must quickly determine if all the above criteria have been met and that the defensive player in the area of the pop up can make the play with “ordinary effort”.

As you can imagine, determining ordinary effort can be a little tricky for an umpire. There are a few factors that they must quickly consider before making the call.

First and foremost will be age and defensive player ability. While a pop up in the Majors is usually an easy catch, this may not be the case in say, Little League. 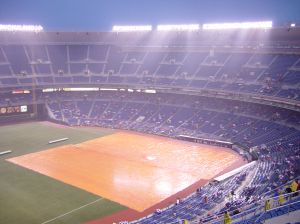 Remember, the infield fly rule is a judgement call made by the umpire. Whether or not the rule is invoked is determined by the decision of the umpire alone and cannot be challenged.

When the umpire has made the decision to invoke the rule, they are taught to yell, “infield fly, batter is out.” If you do not hear this from the umpire, then the batter, base runners, and defenders should assume the ball is live and treat it like any other fly ball.

Never assume the umpire is going to call “infield fly”. This is the umpires decision and until you hear it called as such, proceed as normal.

Now that we know the when and the why, let’s go through some scenarios where the infield fly could be called.

Let’s say you have a runner on first and second with no outs.

The batter swings and hits a pop up in the general area of the third baseman. The umpire determines that all the criteria we talked about has been met.

The umpire also determines that the pop up can be caught with ordinary effort. He/She will immediately put one hand up and yell “infield fly, batter is out.” You now have one out with runners on first and second.

Now let’s say you have bases loaded with no outs. The batter hits a pop up in the area of the third baseman. The umpire determines all of the same criteria has been met. The umpire throws a hand up and yells “infield fly, batter is out.”

In either one of these scenarios, the umpire (any umpire on the field) has the authority to invoke the infield fly rule.

What could happen in either one of these scenarios without the infield fly rule?

In our first scenario, let’s say the third baseman drops the ball on purpose.

In the second scenario, let’s say the third baseman intentionally drops the ball.

If the ball beats each runner to the bases, then they would all be out by force, thereby completing a triple play.

Since the ball was hit in the air, each runner is held to their bases, making the triple play a very possible outcome.

Based on these two scenarios, you can see why the infield fly rule was put into effect.

Clearing Up Some Confusion About The Infield Fly Rule!

There still seems to be a lot of confusion about the infield fly. Let’s try to clear up a few more issues.

– The rule does not apply when there are already two outs. Again, there is no advantage to dropping the ball on purpose since you only get three outs anyway.

– The rule does not apply to a foul ball. If a pop up is hit near the first or third baseline and the umpire is not sure if it will stay fair, or drift foul, the umpire will yell “infield fly, if fair.” If the ball is ultimately caught in foul territory, it is simply an out. If the defender drops the ball while in foul territory, it is simply a foul ball, whether or not infield fly was called.

– The rule does not apply “only for infielders”. Let’s say the umpire invoked the infield fly rule. The third baseman is drifting back into left field to make the catch, but the left fielder calls him off because it would be an easier catch for them to make. This does not negate the initial call. The infield fly is still in effect.

– The rule is not just for the infield itself. Often times an umpire will call the rule into effect on pop ups hit into the shallow outfield. This would be mostly in the higher levels. Defensive player ability would really need to be considered when making this call.

The last two situations we will clear up can really be confusing, sometimes even for the umpire.

– Let’s say the umpire called the infield fly rule. The batter hits a pop up towards first base, but the first baseman misses the ball completely (the ball is untouched by any defender). The ball lands in fair territory, but due to the spin, it ends up rolling foul before first base. If this happens, the infield fly rule does not apply and the correct call is simply a foul ball and the batter is still up.

If the ball rolled foul after the base, the infield fly call would stay in effect, as this would normally be a hit.

– Can the other runners still advance when the umpire has called the infield fly rule into effect? Absolutely!

Just remember that when the infield fly has been called, the batter is already out, so all of the force outs in front of the runner have been nullified, meaning that you do not have to try to advance to the next base.

The Infield Fly Rule Explained – We did it!

Congratulations, you are now an expert on baseball’s most confusing play.

I hope this article on the infield fly rule explained has cleared up most of the confusion you may have had.

I know this is a lot to take in at once, so come on back anytime you want and read over it a few more times. If you have any more questions about the infamous “infield fly rule,” or would like to add anything, just leave a comment below and I will get back with you A.S.A.P.   ~Jeremy

P.S. If you would like to check out some more basic baseball rules, you can check out my article on Simple Baseball Rules.

This Page Has You Covered!