Here are a few simple baseball rules for the beginner, and maybe a little something for the old pro too. Trust 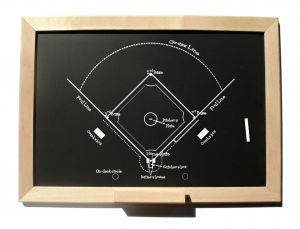 me, every time I think I know all there is to know, I find out how wrong I am. For now, we will try to cover the basics.

On the defensive side of the game there are 9 players on the field at all times. Each player has their own position on the field and each position has a number.

Position #1 is the pitcher: The pitchers job is to throw the ball to the catcher, and (hopefully) not let the batter hit it. When the pitcher puts his foot on the rubber plate on the mound, play begins. The pitcher controls the pace of the game. In the National League a pitcher bats. In the American League, there is a designated hitter (D.H.). The D.H. usually bats for the pitcher because the pitcher is normally the least proficient hitter.

Position #2 is the catcher: The catchers main job is to catch the pitch from the pitcher. Like the pitcher, the catcher also plays an important role in preventing runners from being able to steal bases. The catcher and pitcher can also be defensive fielders, usually in the case of a bunt, or a ball hit softly between the two.

Position #3 is the first baseman: The first baseman covers the field between first base and the second baseman. A majority of plays made will involve the first baseman. When the batter hits the ball, he will run to first base as fast as possible to try and beat the throw from any fielder who fielded the ball. If the ball beats the runner to the base, then he is called out.

Position #7 is the left fielder: The left fielder covers all ground between the center fielder and the seats, and from the outfield fence to the third baseman and short stop.

Position #9 is the right fielder: The right fielder covers all ground between the center fielder and the seats, and from the outfield fence to the second baseman and the first baseman.

To determine a players position on the field, imagine standing at home plate facing the pitcher. Right field would be to your right and left field to your left. Center field is in between right and left. Working right to left, the infield would go first, second, short stop then third. 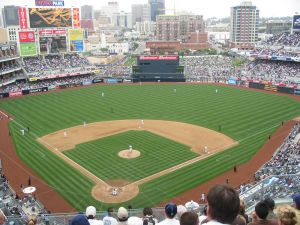 Your number 1 and 2 batters will usually be hitters with a high batting average and on base percentage. These are guys who are on base more often and usually have a lot of speed, giving them the ability to steal bases, and score on a ball hit into the outfield.

The number 3 and 4 batters are the guys who typically have a lot of power. These are the batters you want at the plate when you already have runners on the bases.

The number 5 and 6 batters are still pretty good hitters, but usually have a slightly lower batting average and on base percentage than the top 4 batters. You still want the ability to score runs if the top 4 aren’t producing.

Your 7, 8, and 9 batters may not have the best batting average, but they are still good ball players. In todays game, these will usually be your outfielders and catcher. They may not bring a great deal to the offense, but are usually outstanding defensive players.

There are 9 innings in a regulation game. Each team gets 3 outs in their offensive half of the inning. An out is recorded when a hit ball is caught before the ball hits the ground, or if the ball beats you to the base. There are double, even triple plays where you can end an inning with one play. A strikeout is also an out. You get 3 strikes per at bat, with unlimited foul balls. The first 2 foul balls count as strikes. The exception is when bunting: If you already have 2 strikes, a foul ball while bunting will count as strike 3. There are no ties in baseball: The game will continue in unlimited extra innings. One of the longest games in MLB history was in 1984 when the Chicago White sox beat the Milwaukee Brewers 7-6 in 25 innings.

There are tons of rules in baseball, and we have only covered some of the basics. If you have any questions about any rule, please feel free to leave a comment below. I promise to give you a quick answer.