I have another question for you…What is a stolen base in baseball? 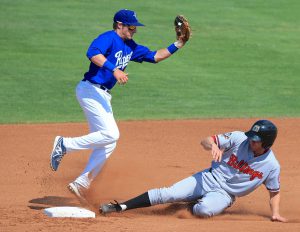 Howdy friends and welcome back to another exciting edition of Baseball 101.

As many of you know, one of my favorite things to do on BaseballXGear is to field questions about the game of baseball and softball.

This was a question a visitor asked through an e mail, and of course I wanted to share the answer with everyone.

We have now passed the midway point of the season! Is it just me, or does it seem like the baseball season goes by way too fast? It seems like Opening Day was just a couple of weeks ago!

I hope your team is doing well and that everyone is enjoying the season. My Tigers are not looking very good for a playoff run this year, but you never know.

O.K. Let’s get this baby rolling and answer the question – What is a stolen base?

What Is A Stolen Base?

Let’s clear up one thing right away.

No one will be going to jail for stealing a base in baseball or softball. 🙂

A stolen base means that a runner has advanced one base without the benefit of a hit, error, walk or wild pitch.

What Conditions Must Be Present To Steal A Base?

In order for a runner to attempt to steal a base, there are some things that need to be in play.

Only a runner who has already reached base safely can attempt to steal a base.

This means that a batter cannot attempt to steal anything. You cannot steal 1st base.

If the base that the runner is attempting to steal is already occupied by another runner, the runner can’t steal it unless that runner also attempts to steal the base in front of them.

This is called a double steal.

Home plate can also be stolen, although it is very rare at the professional level.

Is a stolen base starting to make sense now?

Let’s run through some stolen base scenarios to help clear things up a little better.

Here’s the set up.

Our future base stealer steps to the plate and hits a line drive to the left field gap.

Our speedy runner cruises into 2nd base for a stand up double, driving in the runner who was already on 3rd base and collecting a RBI.

The umpire calls time out and the manager makes a visit to the mound to discuss the next play.

Everyone gets set and the umpire signals time in. At this point, the runner can attempt to steal 3rd base at any time since it is unoccupied. 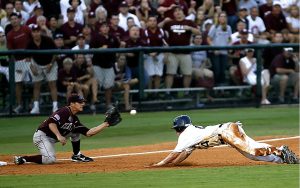 The pitcher gets set to deliver the next pitch and our runner on second takes off like a bat out of hell for 3rd base.

The catcher catches the pitch and throws the ball to the 3rd baseman to try and tag the runner before he reaches 3rd base, but the throw is too late.

Our runner slides safely into 3rd and records a stolen base!

The first 2 batters of the inning have both reached base safely with back to back singles.

The manager has decided that this would be the perfect time for a double steal attempt since both runners on base have good speed and the pitcher has a slow delivery to the plate.

The manager also knows that the catcher has been prone lately to giving up stolen bases.

The pitcher gets set to deliver the pitch and both runners are off to the races, trying to steal 2nd and 3rd at the same time.

The catcher decides to throw the ball to 2nd, but the throw is way too late to catch the speedy runner sliding into 2nd.

Both runners are safe and have successfully completed a rare double steal!

Can an error negate a stolen base?

If an error occurs during a stolen base attempt and the official scorer determines that the runner attempting the steal was only safe because of said error, then the runner would not be credited with a stolen base.

If the runner is attempting a stolen base and the pitcher delivers a wild pitch that the catcher is unable to catch, this would also be considered an error and the runner would not be credited with a stolen base.

A stolen base in baseball and softball is not a crime.

A base runner is credited with a stolen base when they are able to reach the next base safely without the benefit of any help from any other action on the field, including an error.

A stolen base can only be accomplished by a runner who is already on base. A batter cannot steal a base.

A stolen base can be attempted any time during a game after the umpire signals time in for play to begin.

Keep in mind that for the defense to get an out on the runner attempting to steal a base, they must “tag” the runner with the ball.

There is no force out at the next base since the runner is not being “forced” to try to advance.

Well we made it. You are now a stolen base expert!

I hope you enjoyed this article on, What is a stolen base?

If you have any questions, please leave a comment and I will get with you right away.