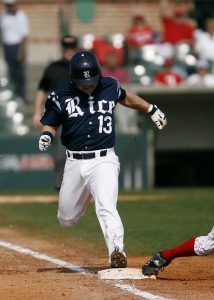 Howdy baseball fans, conversationalists and thrill seekers. Welcome back to another exciting edition of baseball 101!

O.K. I hear you…Just changing up the intro a little bit.

In today’s post we will be exploring the most basic of hits that a batter can get…the single.

Although the single is a basic hit, a lot of positive things can happen for the offense when a batter hits a single, especially if there are already other runners on  base.

So without further ado, let’s explain what a single in baseball is and run through a few plays that result in a little more than just a single.

A single in softball is explained the same as in baseball.

A Single In Baseball Explained

A single in baseball occurs when a batter hits the ball anywhere into the field of play and only reaches 1st base safely.

If the runner were able to make it safely past 1st base, then the hit would no longer be scored as a single. I will do a couple of follow up articles on hits where a batter advances past 1st base.

Think of it like this: If a batter hits the ball and only reaches 1 base before the play is over, it is a single. A single is scored 1B, or single, depending on the scorer.

Does An Error Negate A Single?

Any time the defense commits an error during a play, it is going to effect the way the play is scored. 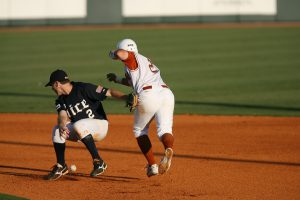 Let’s say our batter hits a ground ball to the short stop. The short stop doesn’t field the ball cleanly and the ball rolls away.

The short stop picks the ball up and throws it to the 1st baseman, but the throw is a step too late.

Although the batter was able to beat the throw and reach 1st base safely, he will  not be credited with a hit.

The play will be scored as E6, meaning that the short stop (Player Position #6) made an error on the play that resulted in the batter being able to reach 1st base safely.

Now that we have that cleared up, let’s take a look at a couple plays where a single becomes more than a single. 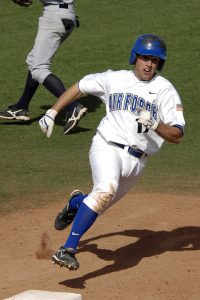 A single can do a lot of damage with runners already on base.

Let’s say there is a runner already on 2nd base when our batter steps to the plate.

The pitcher delivers the pitch and the batter hits a sharp liner into the outfield.

Our speedy runner on 2nd is off and running with the crack of the bat.

The left fielder is able to field the ball cleanly, but is not able to make a throw to home before the runner on 2nd can score. The throw is however quick enough to stop the batter from advancing past 1st base.

On this play, the batter would be credited with an RBI (Run batted in) and a single.

Now let’s say there are already runners on 2nd and 3rd base.

Our batter hits a liner up the middle of the infield and the ball makes it to center field.

When the ball was hit, our runners on 2nd and 3rd base took off running.

The center fielder charges up and fields the ball cleanly, but sees that he will not be able to throw the ball home before both runners can score. He throws the ball to his cut off man who is able to prevent the batter from advancing past 1st base.

While the batter was unable to get more than a single out of the hit, he is still credited with 2 RBI’s for the runners who scored!

A Single In Baseball Explained: That’s A Wrap!

If a batter hits a ball into the field of play and is only able to reach 1st base safely, with no defensive errors on the play, then it is scored as a single.

While a single may be the most basic hit you can get, as we’ve seen, it can still do a lot of damage!

I hope you enjoyed the article on a single in baseball explained.

If you have any questions about anything, please leave a comment below and I will be more than happy to help.

P.S. Don’t forget to check out our Tips, Advice & Rules Page for tons of info about the game of baseball.