So, exactly what is an unassisted triple play in baseball? What about softball? 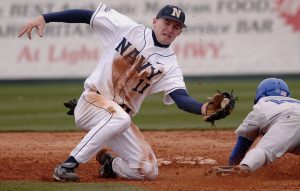 Hello everyone and welcome back!

Today we will go over one of the rarest defensive plays that can occur during the course of a baseball or softball game…The unassisted triple play.

If you are new to the game of baseball, there is probably a good chance that you have never had a chance to see one take place.

As long as I have been around the game, I have only seen 2, one at a “beer league” softball game and one at one of my kid’s Little League game.

So without further ado, let’s get right to it.

What is an unassisted triple play?

An unassisted triple play occurs when one player is able to get all three outs in the defensive half of the inning in one continuous play without the help of any other defensive player. 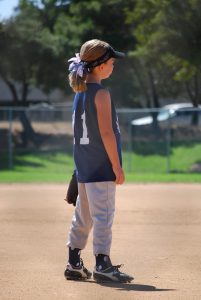 This is truly a rare feat and requires quick and precise action on the part of the defensive player involved.

Here are the conditions that must be present for an unassisted triple play to occur:

The easiest way to explain an unassisted triple play is to go through a couple of scenarios where one occurs. I know this helps me and judging by recent feedback, I think it has helped a lot with a few of our most recent articles.

In case you missed them, here’s the links: 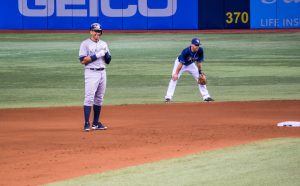 If you’ve been with us for a while now, you most likely know that position #6 on the field is the short stop.

If this is your first visit with us, or you are not familiar with player position numbers, Check Out This Article to see the numbers of each defensive player and tons of other cool info.

Okay, here’s the set up:

Our first two batters of the inning have successfully reached base on back to back singles and currently occupy first and second base. So we have 2 on and no outs.

The pitcher delivers the pitch and the next batter hits a sharp line drive directly at the short stop (position #6) who catches the ball before it hits the ground. That’s out #1!

Our runner who was originally on 2nd base has taken a little bit too much of a lead off the base and is unable to get back to the bag before our quick thinking short stop steps on second. That’s out #2!

Our runner that was on first base took off running at the crack of the bat and didn’t see the play in front of him.

Our fast thinking short stop sees the runner coming from first and is fast enough to run him down and apply a tag before he can retreat to first. That’s out #3!

The short stop has successfully completed a 6 unassisted triple play! 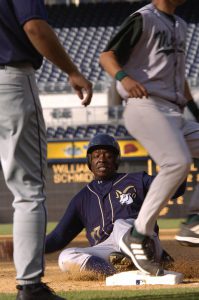 Here’s the set up:

Our first 2 batters in the inning have reached base safely with back to back singles and our third batter reaches on a walk issued by the pitcher, thereby “loading the bases.”

Our 4th batter of the inning hits a sharp liner directly at the 3rd baseman (position #5) who catches the ball before it hits the ground. That’s out #1!

The manager, seeing what he thought was a great opportunity, decided to put on a triple steal.

Our quick thinking 3rd baseman, steps on third base before the runner who was on third can retreat back to the bag. That’s out #2!

Now our third baseman turns and tags the runner coming from 2nd base who was trying to steal third. The runner realizes that the third baseman caught the ball, but it’s too late to get back to second. That’s out #3!

Now of course the 3rd baseman could have thrown the ball back to second since the runner failed to “tag up,” but since the runner is easily tagged with the ball, there is no reason to risk a throwing error.

Our third baseman has successfully completed a 5 unassisted triple play!

As you can imagine, unassisted triple plays are very rare.

According to MLB.com, only 15 unassisted triple plays have been successfully completed in the history of Major League Baseball, with only 1 occurring during a World Series game. That honor belongs to Bill Wambsganss of the Cleveland Indians during the 1920 World Series.

What is an unassisted triple play?

I would say that aside from a dove being hit and killed by a pitch mid flight, an unassisted triple play is one of the rarest occurrences that you will ever see during the course of baseball game.

That unfortunate incident happened to Randy Johnson during a Spring Training game in 2001 as a dove flew across the infield and was struck with a near 100 mph fastball. Let’s just say that it wasn’t pretty.

I hope that you enjoyed this article and that we answered the question; “What is an unassisted triple play”. If you have any other questions about this article, or anything else, please leave a comment below and I will get right back with you.