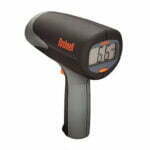 Welcome back! Today we will be looking at the Bushnell Velocity Radar Gun

Most coaches consider the use of a radar gun to be an important tool for player development. No matter the skill level, incorporating a radar gun into your practices is a great method to help your players improve their speeds, which builds confidence.

While I know there are some coaches and parents out there who think that using a radar gun with young kids is not a good idea, I believe it is a great idea to use as a motivator for constant improvement. As long as you are going through your proper warm up and stretching routines, you will be just fine.

The Bushnell Velocity Speed Gun is the perfect radar gun for those not looking to spend a ton of money on a professional model, but at the same time want the instant feedback a radar gun can provide.

Size: Measuring only 4.3″ wide x 8.4″ high x 6″ long and weighing in at only 19 ounces, the Bushnell Radar Gun is small enough to easily operate with one hand, and light enough so that your arm wont get tired.

Display: This radar gun offers a large, clear LCD screen that makes pitch speeds very easy to read, even on those sunny days.

Accuracy: The Bushnell can measure the speed of an object as small as a baseball from a distance of up to 90 feet away and, although I’ve never tied it, they claim it can measure vehicle speeds from as far away as 1,500 feet within +/- 1 mph (2 kph) of the exact speed. 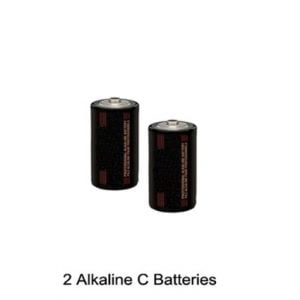 Point & Squeeze Trigger: The trigger system is quite easy to operate, you simply line yourself up with the object you wish to measure, aim the gun, and pull the trigger. When you release the trigger, the highest recorded speed will be displayed.

Batteries: Operates on 2 C batteries. The general consensus is to expect somewhere between 500 – 700 readings before you need to replace them

Although I primarily used The Bushnell Velocity Speed Gun for measuring pitch speeds and runner speeds for baseball practice, the applications are virtually endless.

Many people are using the gun for measuring tennis serve and return speeds, volleyball serve speeds, and soccer kick speeds. I’ve even heard of people measuring Frisbee speeds. I’m not exactly sure how it would do with a golf drive as I have not tried it, but I would have to assume that it would work if you were close enough.

Have a speeding problem in your neighborhood? The Bushnell can give you instant and accurate vehicle speeds. While I do not recommend trying to become the neighborhood cop, it is a good way to expose the problem and report it to the police. Just keep in mind that this radar gun is not certified.

Accuracy: One of the most common complaints I see with the Bushnell Velocity Speed gun is with accuracy.

In my personal experience with the gun, I have noticed that if you are slightly off line with the object you are trying to measure, it will produce readings of 3-5 mph slower than the actual speed. I have read of others saying it can be as high as 8-10 mph off, but I have not encountered this much of a difference.

The more direct of a line you can get with the ball the better.

I have also found that for whatever reason, it seems that the bigger the object you are trying to measure, the more accurate the readings are.

Consistency: While I have read some other reviews from customers complaining about inconsistent readings, I found the gun to be pretty consistent. I will have to assume that perhaps they were moving the aim a little off line, or maybe they were picking up interference from some other moving object.

Or perhaps it could have just been “operator error”. To get a good reading on a pitch, you have to squeeze the trigger before the pitch and hold it in all the way until the ball hits the catchers mitt before you release it. The gun will then display the highest speed.

Distance: Another common complaint I have seen is the gun not being able to pick up smaller objects at a distance. Some say you 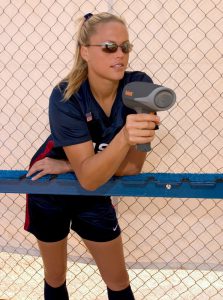 need to literally stand on top of the catcher to get a reading on a baseball.

While I have had a difficult time getting readings from the claimed 90 feet range, it does fairly well from behind a Little league backstop. At the 30-50 feet range, it hasn’t given too many problems.

With distance, accuracy, and consistency, the size of the object you were trying to measure did seem to make a difference.

Machine won’t turn on: Most of time this issue is caused by the improper installation of the batteries. Just be sure to carefully read the installation instructions and install them according to the diagram and you should be just fine. If the machine still don’t work, which happens with every product from time to time, Amazon will generally give you no problems with returning a faulty product.

My best advice to you is to not waste too much time trying to compare the Bushnell Velocity Speed Gun with other models costing 4 or 5 times as much as this one.

It is simply not going to offer the same amount of features or accuracy and consistency you get with a pro scout model radar gun. You are not going to be able to sit a football field away and record pitch speeds and 1st to 2nd speed times.

What you will get is a radar gun that you can use as a practice tool to aid in player development that is pretty consistent at a fair price.

If your budget will allow you to spend a little more money to add a ton of features, better accuracy and consistency, more distance, and hands free usability, then I strongly suggest you check out my #1 recommended radar gun by clicking the button below.

We hope you found this Bushnell Velocity Radar Gun review helpful and informative.

If there are any other questions you have about the Bushnell Speed Gun, or anything at all that I can help you with, please leave a comment below and I will get back with you right away.