Howdy everyone and welcome back. In today’s post we will address the question; What is tagging up in 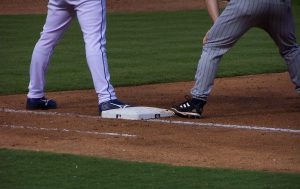 Tagging up in softball will be the same as baseball.

If you’ve been following our last few articles, you will remember that I promised to give a more in depth explanation of one of baseball’s most confusing rules.

In some of our double play and triple play scenarios, we introduced the need for the runners to be caught tagging up to complete plays.

In this article, we will go through the whats and whys of tagging up and run through some scenarios where runners have the option to either tag up, or stay safely on their bag.

So, without further ado, let’s get right to it.

What is tagging up in baseball?

A tagging up situation is a play that occurs during the course of the game that allows a runner who is already safely on a base to advance 1 or more bases when a batter hits the ball in the air and a defender catches the ball before it hits the ground.

Here are the conditions that must be met for a runner to attempt to tag up:

I know the fist one is obvious, but I want to be clear that the batter cannot tag up. If the defender catches the ball in the air, the batter is automatically out, regardless of anything else that happens afterwards.

There has to be less than 2 outs because if there were already 2 outs, the inning would end when the defender caught the ball. Remember that you only get 3 outs per your offensive half of the inning.

Think of tagging up as playing tag; no matter how far you stray, as long as you get back to base, or to your next objective before the ball, you’re safe.

As long as time hasn’t been called by the umpire, thereby signaling the end of the play, the runner can attempt to advance after the ball is caught.

As long as the runner got back to the original base they were on at the exact moment or any time after the catch was made, they can attempt to tag up and advance to the next base.

Next up, we will go through a couple of scenarios to help us better understand tagging up.

How tagging up works 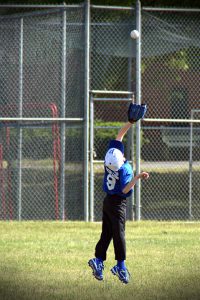 Here’s the set up:

Our first batter is walked by the pitcher by not swinging at 4 pitches outside the strike zone. The batter now becomes our runner on first base with no outs.

Our runner on first base sees that the right fielder has a good chance of catching the ball, so he makes a quick retreat back to first.

If our runner is fast enough and reaches second base before the second baseman can tag him with the ball, he is safe!

In this same situation, let’s say that our runner on first base decided to try to tag up, but left first before the right fielder actually caught the ball. 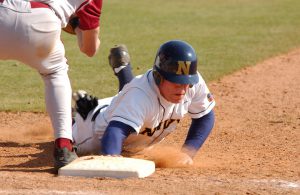 In this case, the right fielder only needs to throw the ball to first base before the runner can get back to first.

When this happens, there is no need to tag the runner. Touching the base before the runner gets back is an out.

This is something that commonly happens when a ball is hit deep to the outfield and the runner on base is unsure of whether or not the outfielder is going to be able to make the catch or not.

This is commonly referred to as “being caught in no man’s land.”

Can the runner advance more than 1 base when tagging up?

Once a “tagging up” play has started, there is no limit on how far the runner can advance.

Next, we will go through a scenario where a runner on first base advances all the way to home on 1 fly ball.

Tagging up from first to home 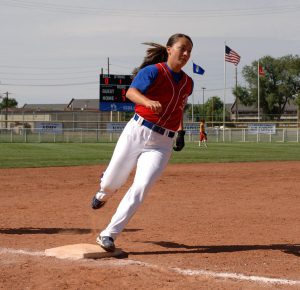 Using our original set up, our batter hits a fly ball to right field.

Our runner tags up and makes it safely to second before the throw from the right fielder.

As the throw is coming into second, the ball gets past the second baseman and rolls into the outfield.

Our runner alertly gets up and high tails it to third base before anyone can pick up the ball and throw it to third.

The left fielder picks up the ball and makes a bad throw over the third baseman’s head.

Our alert runner sees the poor throw and decides to try to make it home.

The only one left to get the errant throw from the left fielder is the catcher, but by the time he can make it to home plate, our speedy runner has already crossed the plate and scored a run!

This play included some errors on the part of the defense that are pretty rare on the professional level, but it can and does happen.

This is a play that happened during one of my son’s games a couple of years ago that was an absolute nightmare to figure out on a score card!

Some final words on tagging up in baseball

Tagging up can occur from any base, with any amount of runners already on.

Just remember that if you have any runners in front of you, you better make sure that they are going to tag up also.

If you are on first base and decide to try to tag up, but the runner in front of you on second base has second thoughts and decides to go back to second, you will most likely find yourself caught in “no man’s land!”

I hope you have found this article helpful and that I have answered the question “What is tagging up in baseball?”. If you have any other questions, please leave a comment below and I will get right back with you.

Thanks for stopping by ~Jeremy
P.S. If you would like to learn some more baseball rules, Check Out This Article