Well, exactly what is a strikeout?

Howdy everyone and welcome back!

I hope you are all having a great baseball season. As the division races start to heat up, I thought we would continue explaining some more baseball rules that we get asked about.

In today’s post, we will be going over the strikeout.

Keep in mind that if you ever have any questions about anything to do with baseball or softball, you can head over to the Ask Jeremy tab at the top of the page and I will get you an answer a.s.a.p.

So without further ado, let’s answer the question, What is a strikeout?

The strikeout rules are the same for fast-pitch softball as well.

What Is A Strikeout?

A strikeout is recorded for a pitcher and against a batter when 3 pitches during an at bat are either:

A strikeout can also be a combination of swings and misses and pitches in the strike zone that are not swung at.

What Is A Strikeout?: Caught Looking!

In this example of a strikeout, we will see what I consider to be the biggest no-no for a batter. 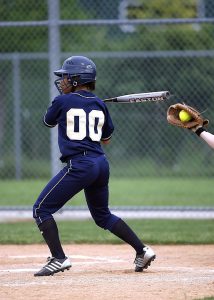 Our batter has already swung and missed at 2 pitches during this at bat.

The pitcher has also thrown 3 pitches out of the strike zone, so the count on the batter is 3-2. This is referred to as a full count. 3 balls and 2 strikes.

Our batter is hoping to draw a walk, so when the pitcher delivers the next pitch, he decides not to swing, even though the pitch was in the strike zone.

The umpire signals a strike and the batter is out.

The batter was “Caught Looking” at a called 3rd strike.

When a batter has 2 strikes against them during an at bat, it is their job to “protect the plate.” What I mean by this, is that they have to swing at anything close to a strike.

You can argue a lot of things in baseball, but you cannot argue balls and strikes.

I teach kids from a young age that if you have 2 strikes, you have to swing at anything close.

What Is A Strikeout?: Swing And Miss! 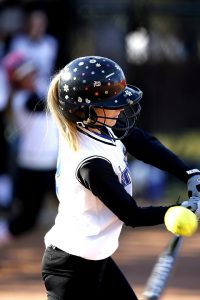 A swing and miss strikeout is recorded when a batter who already has 2 strikes against them during an at bat swings at a pitch, but doesn’t hit the ball.

In this example, our batter has already watched 2 perfectly placed fastballs go by without swinging.

Our batter is anxious and doesn’t want to be caught looking at strike 3, so she determines that she is going to swing at the next pitch if it’s close to the strike zone.

This count puts the pitcher in a favorable position to record a strikeout.

Knowing that the batter is prepared to swing at the next pitch, the pitcher decides to throw a curve ball.

Our batter recognizes the spin on the ball, but too late. The curve ball has completely thrown off her timing and she swings and misses. This is often times called a “whiff.”

The batter is called out on a swing and miss 3rd strike.

Although no batter likes to strikeout, a swing and miss 3rd strike is much more preferable to being caught looking. 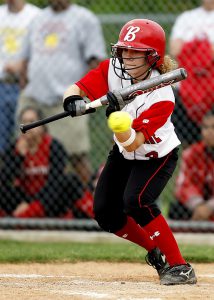 In baseball and fast-pitch softball, there is no limit on the number of foul balls that a batter can hit. Only the first 2 foul balls will be recorded as strikes.

A foul ball is any ball hit off the bat that goes outside the lines.

The defense can still make a play on the ball, but if they fail to catch it before it makes contact with the ground or any other object, it is simply a foul ball.

Now a foul ball that is hit while a batter is attempting to bunt when they already have 2 strikes against them during an at bat will be recorded as a strikeout.

This is the only time a batter can be charged with a strikeout after hitting a foul ball.

Why Would A Batter Attempt A Bunt With 2 Strikes?

There are certain situations during a game when a coach will decide to attempt a bunt, even with 2 strikes on a batter.

The most common reason would be to attempt to advance a runner into scoring position.

This is referred to as a Sacrifice Bunt.

In this example, our team is down by a run and it’s the 9th inning.

Our batter has attempted to bunt twice, but he has fouled off the first 2 pitches.

In a desperate attempt to move the runner on first base to second base (a more favorable scoring position), our coach decides to keep the bunt sign on.

The pitch is delivered and the batter fouls off the ball on another bunt attempt.

The batter is called out and charged with a strikeout.

Bunting with 2 strikes against you is risky, but there are certainly situations where it is understandable.

What Is A Strike Out?: Wrap It Up!

A strikeout in baseball and fast-pitch softball is when a batter is charged with 3 strikes against them during an at bat.

The pitcher is awarded with a strikeout when they are able to fool a batter into watching a 3rd strike go by without swinging (caught looking) or by forcing them to swing at a pitch for the 3rd strike that they are unable to hit (whiff).

I hope you found this article helpful and informative. If you have any questions or anything you would like to add concerning the question “What Is A Strikeout?” please leave a comment below and I will get back with you a.s.a.p.